Other Features of Balance Sheet Recessions 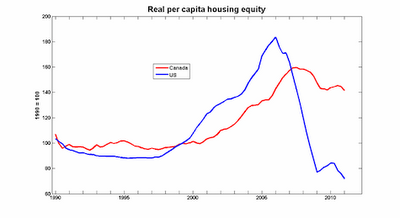 Graph showing the extent of how much house prices in the US have fallen since start of balance sheet recession. Source: Economists view

Before the recession, saving rates fell to very low levels as borrowing increased. Following the start of the recession, saving rates increased in countries like Ireland, UK and US as consumers tried to pay off debts and increase savings.
E.g. Japan had government sector debt of over 220% of GDP, yet bond yields were as low as 1%.
In 2011, The US has seen a fall in bond yields to 1.75% on 10 year treasury bonds, despite a rise in government borrowing.
Problems of Balance Sheet Recession